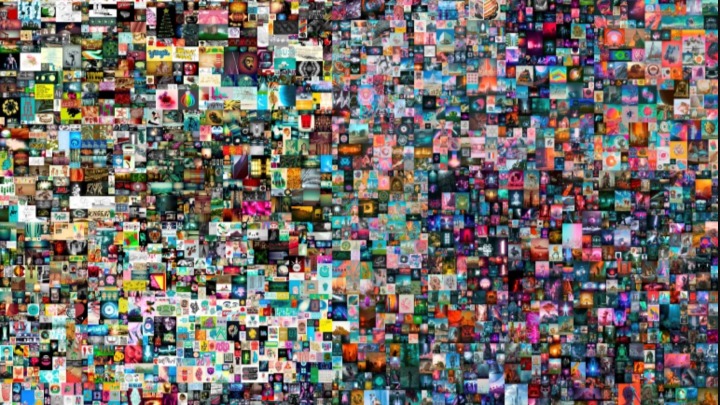 You may have heard about NFT’s. You’ve seen them pop up all over the place recently but you’re wondering what even are these and why are they the new fad lately?

It might seem absolutely bizarre that these NFT’s are selling for millions of dollars – since… they’re just a JPEG or a video… right?

Well, yes and no. Technically speaking, it’s a picture attached to a smart contract, so when people refer to NFT’s, they are talking about the smart contract part.

Smart contracts sound confusing so just think of it as your email address and NFT’s is just that address with an image attached to it.

NFT stands for Non-Fungible Token which essentially is a fancy way to say item X does not equal item Y.

For example, your $5 note is exactly the same value as someone else’s $5 note, but your vintage $1 might not be worth the same amount as a regular $1.

In the land of Crypto, that vintage $1 would be known as a NFT. An NFT is a unique object, which uses blockchain to prove its uniqueness and authenticity.

A Closer look at the top selling NFTs in 2021

The most expensive NFT ever sold in the world on the renowned Art Auction Platform, Christie’s. It was sold on 11 March 2021 and this piece of art was crafted by Beeple, and it was a collection of all his artwork. He began posting a new piece of art everyday since 2007 to the internet and since then has not missed a single day.

CryptoPunks are some of the original NFT’s on Ethereum and as a result, they can sell for large amounts of money. This particular one sold for 4200 ETH back in 2018.

Another masterpiece of Beeple, Crossroad is a short video clip, depicting a defeated Trump lying on the sidewalk.

How much is the first Tweet from the founder of Twitter himself worth? Well apparently an easy $2.9 Million dollars. Sold on March 2021, Jack Dorsey minted an NFT of his first tweet. He will be donating 100% of the funds though.

Another CryptoPunk on this list, but this time, the features is an odd looking ape. The second most rare type after the alien CryptoPunk.

Produced by 3LAU, whoever the winner is of this piece will be able to choose the song name.

A rare ape type CryptoPunk with a blue bandana this time!

Not Forgotten, But Gone: $1 Million

Floating skeleton gummy bears? This one is by a contemporary artist which has actual massive statues of his gummy bears appearing in the city of Brooklyn.

3D illustrator Antoni Tuidsco partnered up with Steve Aoki, a Musician to produce this NFT which illustrates a blue creature dancing to the beats.

This collection is by Beeple again but this time, the owner all received a physical copy of the NFT to go along with the digital counterpart. It also contained some unusual things like Beeple’s hair and a titanium backplate.

There are many types of NFT’s in the crypto world. From just images and videos to have functionalities that users can interact with. Here are some of the most popular NFT Categories.

CryptoPunks are collectible 24×24 pixel images created algorithmically. Each “punk” is unique with their own traits and attributes,shown on individual profile pages.

A fantasy football team collectible card game where players create teams of 5 players. That team will then earn points depending on the performance of the real life player counterpart.

EulerBeats are a set of limited edition, algorithmically created art and music “records”. These are based on the Euler number and the Euler’s totient function. Each original record has two sides titled “Genisis” and “Enigma” each of which are capped at 27.

The goal is to make a completely decentralized world where players can freely buy and sell land. Players can build whatever they desire on the land they own within Decentraland.

The ultimate voxel blockchain game allows players and developers to create their dreams and monetize their work! Developers can create games and sell it. Players can play games and earn money.

The largest NFT marketplace which acts like a hub where other NFT sites can connect with. Anyone can buy on Rarible, SuperRare, CryptoKitties etc through Opensea.

A super easy site for anyone to mint their own NFT’s. There’s heaps of different types of art on Rarible that people can browse and purchase if they like.

SuperRate is a platform that focuses on selling more ‘unique’ art as they only allow hand picked artists to sell on their platform.

Foundation is similar to Rarible but they seem to have a little bit more structure than Rarible.

This is another hub site like Opensea but more focused on the EOS side of NFT’s and Wax blockchains.

The home of NFT’s in 2021, anyone can mint their own NFT. Could be for general use or have other functionality if you choose to modify the smart contract.

This is a game focused platform for NFT’s. The idea is to interconnect game items where players can buy and sell in game items for real money.

A NFT specific blockchain which was founded by the team who created CryptoKitties. Flow has many partners backing them from the likes of Ubisoft, NBA, Samsung and Warner Music Group.

Billionaire entrepreneur famous for Shark Tank has been diving super deep into NFT’s. He first minted his first NFT back in January 2021 and since then, buyers have bought two for $81,000.

Mark is now starting a NFT startup – Lazy.com for people to easily share their NFT’s.

Infamous internet sensation Logan Paul has now also joined the NFT craze and has been able to sell more than $5M worth of NFT’s. He’s able to sell his pokemon card unboxing moments as NFT’s and also turning himself into a pokemon card.

The NFL GOAT is launching his own NFT company. The company, Autograph, will bring the biggest names in sports, entertainment and fashion together with creators to create unique digital collectibles.