Buying bitcoin can be really easy and tough at the same time. So much overwhelming information and making sure to do it safely can be a bit much… but we’re going to guide you step by step and give you all the information you need to start buying bitcoin in Canada.

In Canada, there are many ways to purchase bitcoin. Reputable and safe exchanges such as Coinberry, NDAX and Newton are great places to buy from.

We highly recommend using Bitbuy as they have excellent customer support and low fees and spreads. They support the major currencies such as bitcoin, Ethereum and Litecoin.

How To Get Started With Bitbuy 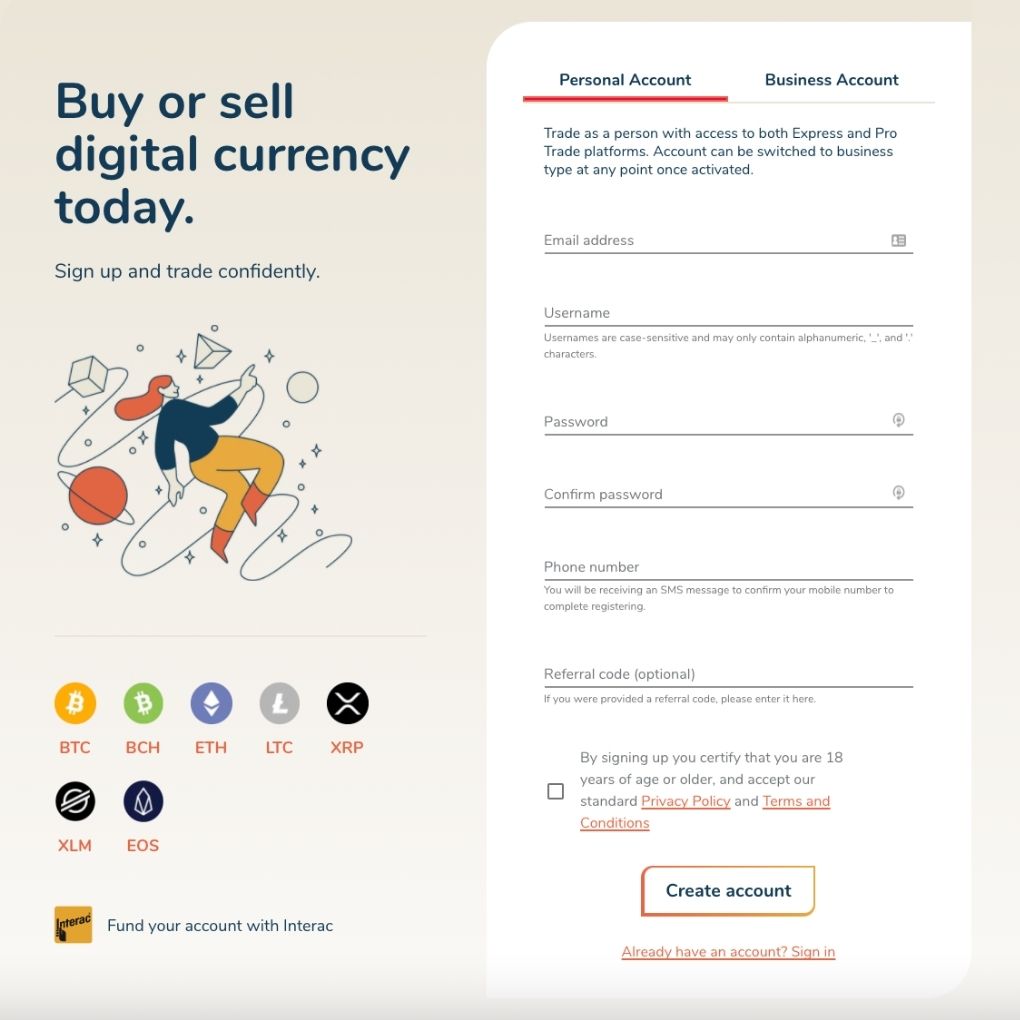 Set up your account here. You’ll be taken to a page where you can quickly create an account with Bitbuy in minutes. 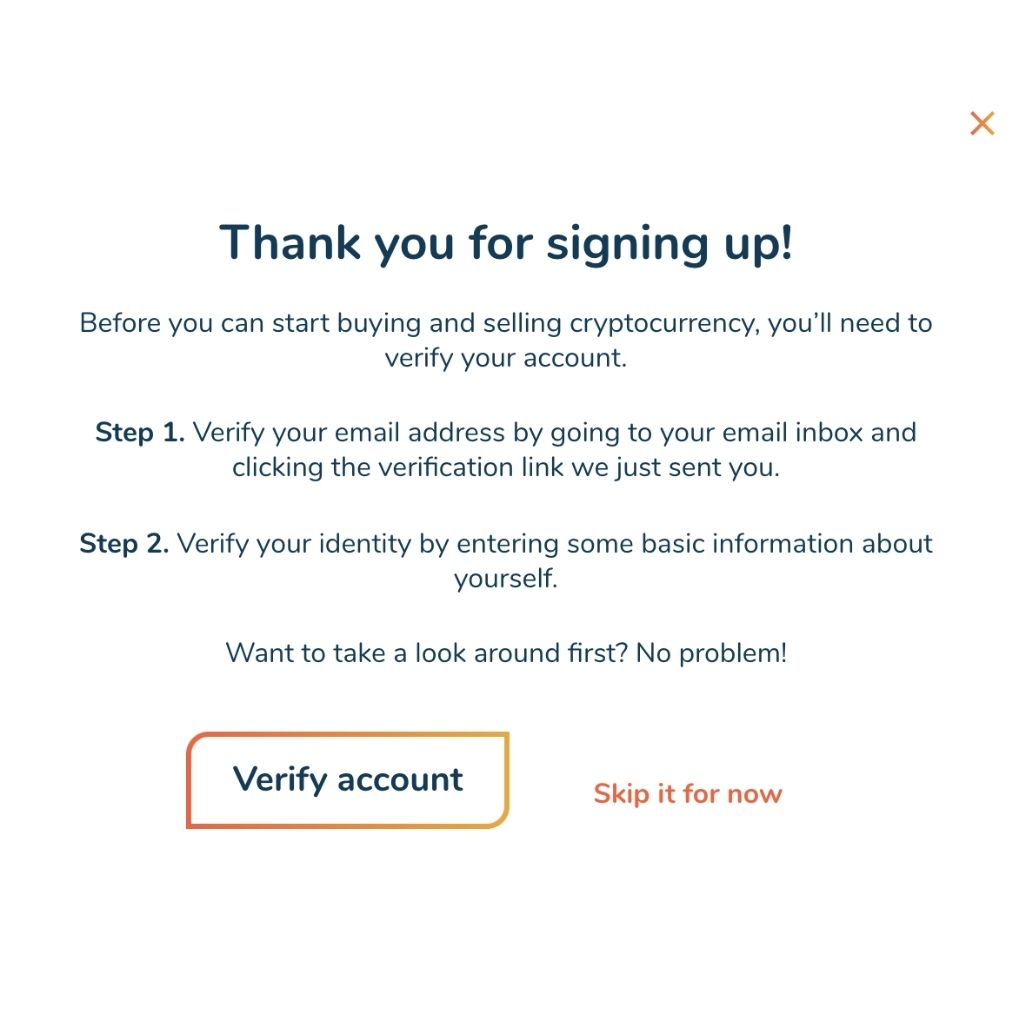 After you have created your account, you would need to verify your details. This is known as Know Your Customer (KYC) where exchanges collect your driver’s license or passport information. But don’t worry as this is normal practice across all exchanges and it’s also required by the government that exchanges collect financial information.

After you’ve verified your information, remember to set up 2-factor authentication (2FA) to protect your account from being hacked without your permission. You can use the google authenticator app by downloading it off the app store. Then every time you sign into your Bitbuy account, you’ll need to enter the code generated on google authenticator. 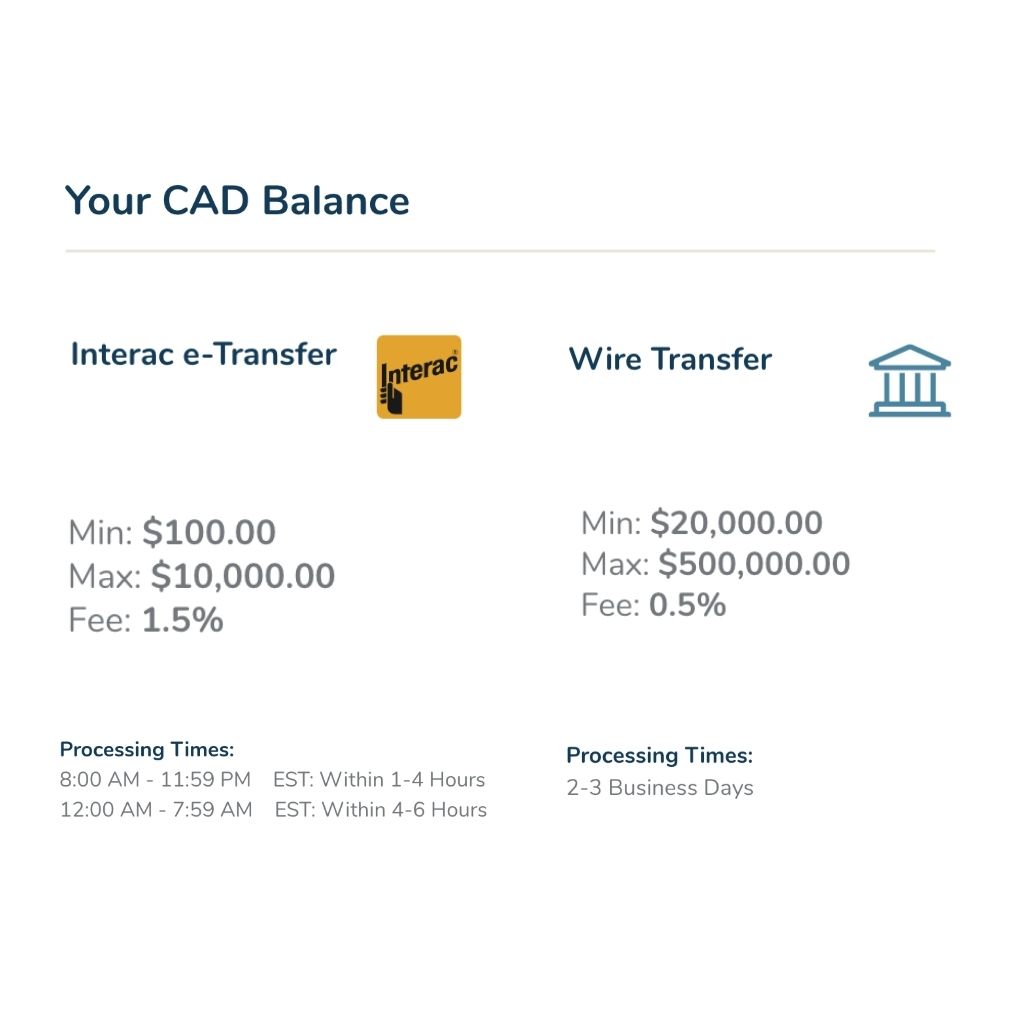 Once you’ve deposited CAD into your account, you can go over to the trading area and buy any cryptocurrency you wish that is listed by Bitbuy.

Where To Buy Bitcoin In Canada

We reviewed many of the top exchanges in Canada and Bitbuy is the one exchange we recommend to beginner and advanced investors alike. You can read our full Bitbuy review here.

Other exchanges we also recommend are Coinberry, NDAX and Newton.

How to Pay for Your Bitcoin

There are numerous ways to pay for your bitcoin. Before bitcoin was popular, it was more frequent to use Peer to Peer trading as generally the only way to get bitcoin was by mining bitcoin themselves.

Now, you can be buying bitcoin in Canada in less than a few hours with a multitude of payment methods involving credit cards, debit cards, Bank Wire transfers, Paypal, Cash deposits and the list goes on.

This is generally the most popular way to buy bitcoin in Canada as it’s not complicated and straight forward. The way you buy bitcoin is simply to sign up to any Canadian exchange such as Bitbuy and then register an account with them.

After you’re all clear in terms of being verified you’re able to deposit CAD using your bank account.  Bitbuy does support Interac e-transfer to help with that process. When you use Interac e-transfer, it only takes a few hours for your funds to clear and show up confirmed in your Bitbuy account.

If you’re looking to deposit a large amount of CAD, you can also choose to use Bank Wire methods. This however will require a $20,000 minimum deposit amount and will take 1-2 business days for your funds to clear. The fees will be 0.5% when you use this method.

Other exchanges such as Coinberry or NDAX don’t have any deposit fees so if you don’t want to pay fees on deposit, we recommend those exchanges as well.

Buying Bitcoin With a Credit Card or Debit Card

The other popular method to buy bitcoin is through a credit card or debit card. But generally speaking, when using these methods, exchanges do charge an extra fee because Visa or Mastercard likes to charge fees.

So if you’re looking to be able to pay with your credit card or debit card, exchanges like Coinberry would be your best bet as Coinberry does not take any deposit fees even on credit cards. However, your maximum deposit via those payment methods is $500.

Paypal is the other big payment gateway many people use to purchase goods and services on the internet. However, there is a major setback with the Paypal design which prevents exchanges to accept Paypal as a payment gateway – and that issue is chargebacks.

You see, Paypal generally leans towards the customer’s side when chargebacks are issues, and because of the ease of issuing chargebacks, chargeback fraud has been an ongoing problem for merchants who use Paypal. And that’s why exchanges don’t accept Paypal as they can’t have people getting free bitcoin.

However, Paypal did announce they were going to offer customers of Paypal to buy bitcoin, Etherum, Litecoin and Bitcoin Cash directly from paypal. This service is going live in the first quarter of 2021 but only for American customers. But we have no doubt, if this service is successful, Paypal would implement it in other countries such as Canada, Europe and Australia.

While this new PayPal cryptocurrency service sounds great, you have to know that when you buy bitcoin off Paypal, you’re not able to withdraw it into your own addresses. Paypal is going to be a custodian of your bitcoin. If you want to withdraw, you’ll need to essentially sell your bitcoin and withdraw Fiat.

Buying bitcoin with cash is becoming less and less popular as regulation is tightening around the Cryptocurrency industry. Governments and financial institutions wants to be able to trade who owns why bitcoin.

That being said, you’re still able to buy bitcoin with cash through websites such as LocalBitcoins and Paxful. This is known as Peer to Peer trading as you will need to find a seller willing to meet up with you so they accept your cash payment.

With LocalBitcoins and Paxful, you’re able to filter down to sellers who are willing to meet up with you in person.

If you’re feeling shy or uncomfortable with meeting up with a stranger to buy bitcoin, you can also use bitcoin ATMs to buy. These ATM’s are being placed all around different cities so you might need to google some which are near where you live.

How it works is you essentially submit cash into the Bitcoin ATM and then the ATM will send you bitcoin. But one thing of note is we have noticed many of these Bitcoin ATMs have a large spread… meaning the price of a bitcoin is significantly higher than what exchanges such as Bitbuy sells bitcoin for.

This is probably because of the anonymity you get from buying from a Bitcoin ATM as no financial information is attached to your addresses.

Bitbuy and other Canadian exchanges offer Wire Transfer as an option but generally exchanges only allow wire transfers if the amount you want to deposit is a large sum of Canadian dollars. For example, Bitbuy has a minimum deposit of $20,000 for their wire transfer payment method.

This is however a good way to deposit if you are looking to make a large deposit.

Buy Bitcoin With Another Crypto

Once you have cryptocurrency, you are able to easily trade in from one crypto to the next. Because there were literally thousands of different cryptocurrencies, some exchanges such as Binance focus on having many coins available for investors to trade with.

Cryptocurrencies have “pairs” when trading and most cryptos are paired with bitcoin, Etherum and USDT. This means you can trade into that cryptocurrency if it’s being paired. Binance supports over 200+ different coins with over 450 pairs – with some of the more popular Altcoins have pairs with many coins.

If you’re looking to trade between many different coins, we highly recommend using Binance as they are one of the biggest exchanges in the world. What this means is you’ll have the best liquidity on the exchange and you’re able to buy and sell crypto easily.

An exchange with low liquidity would mean you might need to wait a few hours before someone is willing to buy or sell at your target prices – or you would not be able to buy and sell in large amounts of volume as that will push the prices up and down rapidly on those exchanges.

This method is similar to buying bitcoin with cash and we would recommend using Paxful or LocalBitcoin to buy with Prepaid or Gift Card. You’re able to filter down to search for people willing to accept these cards for bitcoin.

However, if you buy bitcoin with a gift card, don’t expect a 1:1 trade ratio as gift cards are valued a lot less than cash because of the limited freedom of use. It’s not un-normal to trade $100 worth of gift cards for $50 worth of bitcoin or less.

Some people would like to buy bitcoin anonymously because financial regulation is expanding rapidly. It’s pretty much impossible at this point to buy bitcoin with your bank account without needing to do a KYC of some sort which will peg your financial identity to your addresses and wallets and that makes tracking you extremely easy.

The best ways to buy bitcoin anonymously is through a local ATM which doesn’t take any pictures of you when you buy or through peer to peer exchanges such as Paxful or LocalBitcoins where you exchange cash for bitcoin with another person.

But generally it is getting increasingly harder to be able to buy bitcoin anonymously and we wouldn’t recommend it either as explaining to the tax office how you got the bitcoin is going to be difficult.

Exchanges where you have charts, are focused on the retail investor to be able to quickly buy and sell bitcoin…

But if you want to buy large amounts of bitcoin without moving the price and creating slippage in the market then you would want to buy bitcoin Over-The-Counter. It’s essentially the same concept as peer to peer trading but on a larger scale of regulation. Exchanges such as Binance and Coinbase offer OTC service where you can find people who are willing to sell large amounts of bitcoin for a set price.

Recently, Coinbase was able to use their OTC systems to help Microstrategy secure up to $425 Million dollars worth of bitcoin without moving the market price of bitcoin at all. And that’s extremely impressive given the insane scale of the trade.

How to Store Bitcoin

So the best practice is to only store what you need in your exchange wallet, and withdraw any amount of funds which you plan to hold for a longer term to either a software wallet or a hardware wallet.

Software wallets could be popular wallets such as Metamask or the cryptocurrencies native wallets. At the very least, you control all your funds in here and no one can take your crypto if they don’t have your private keys or seed phrases.

Where can I buy bitcoin in Canada?

You can buy bitcoin through various exchanges in Canada. This is the best way to do it as it’s compliant with financial regulation and it’s quite seamless to do so.

Is bitcoin legal in Canada?

Yes bitcoin is legal in Canada to Buy and Sell. But as a legal currency, bitcoin is not considered legal as it directly competes with the Canadian Dollar.

How do I cash out bitcoin in Canada?

To cash out bitcoin, you’ll need to go on exchanges such as Bitbuy and sell your bitcoin. After that, you can initiate a withdraw function to send CAD back into your bank account.

Is bitcoin Taxable in Canada?

bitcoin is subject to capital gains tax in Canada and thus regular rules regarding capital gains are applied to bitcoin. Please speak to your tax advisor for more information on how this affects you.

Are there bitcoin ATM’s available in Canada?

Yes, bitcoin ATM’s are available in Canada. There are over 800 Bitcoin ATMs spread across different Canadian cities with Toronto and Montreal having the most Bitcoin ATMs. They can be found in locations such as supermarkets, airports, retail stores etc.

Cities And Suburbs Where Bitcoin Is Popular In Canada